Packaging overall is simple, colorful, yet void of any themed branding. Seems to be a generic Domikey packaging unlike what you might see from your favorite GMK set.

The unboxing experience is otherwise devoid of any excitement or flair, but gets the job done.

Tray quality is better than current GMK cardboard, but not as nice as JTK's thick plastic trays.

Simple Domikey Packaging. Doesn't appear to be specific to this set. 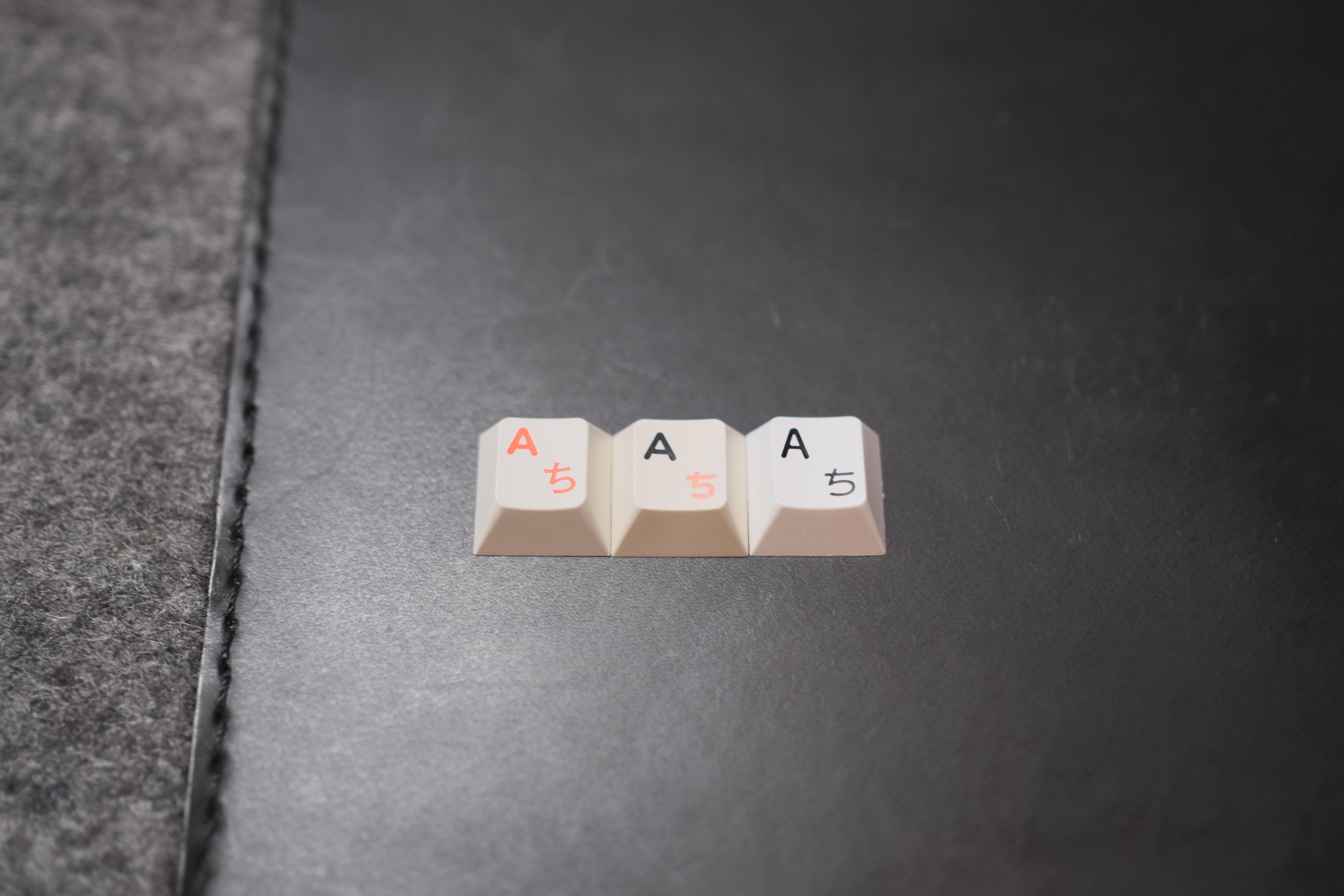 Font legends are slightly different for each manufacturer. All 3 have quite crisp legends overall which is to be expected for double/tripleshot ABS.

Legends on the GMK set are most consistent across the entirety of the set. JTK and Domikey sets both suffer from some minor inconsistencies in font weight. Particularly where "shift" keys and "Menu" keys have a noticeably thicker font on the Domikey set. It's honestly not enough to ruin the set for me, but it is noticeable if you are searching for inconsistencies. 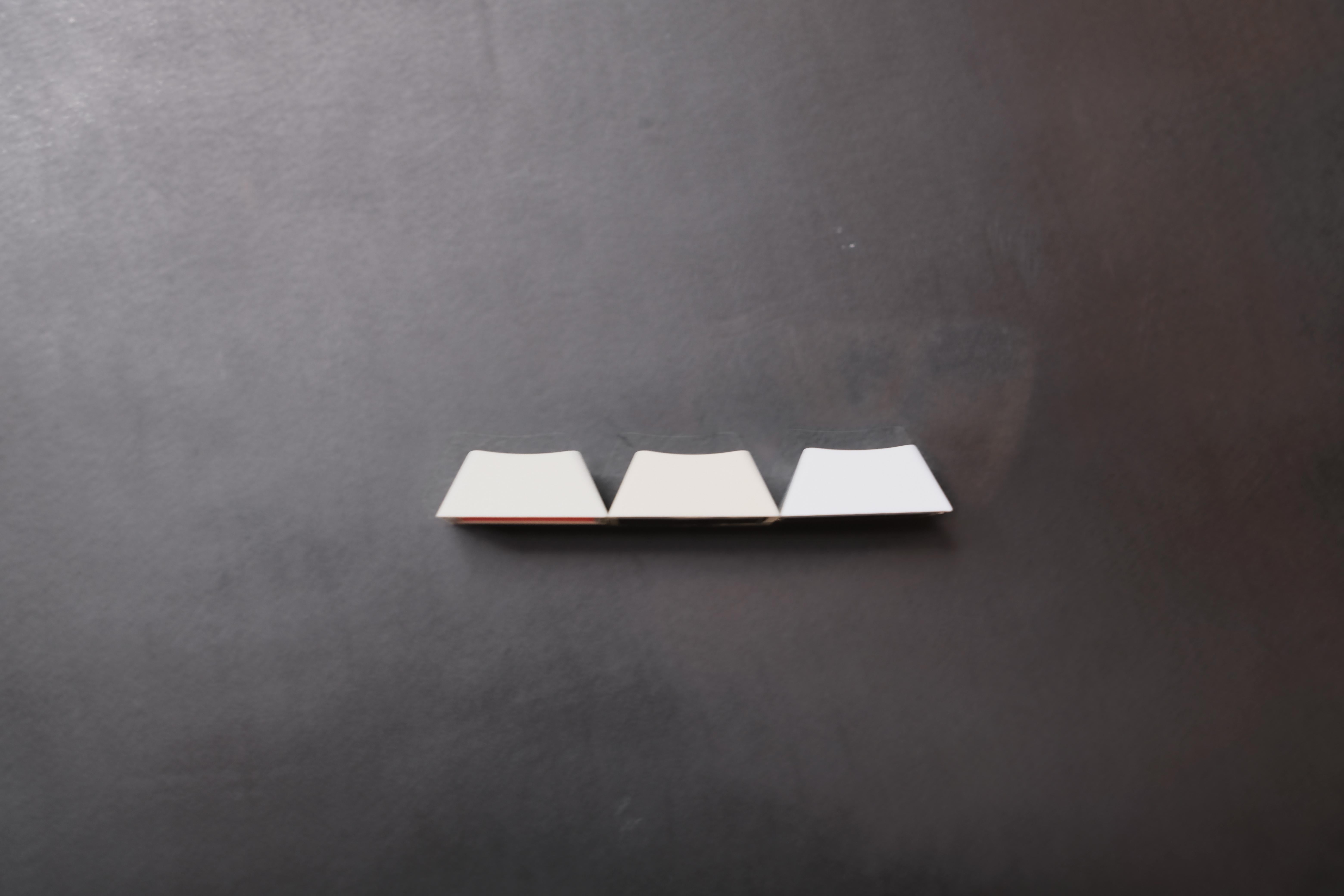 Side Profile overall is essentially identical as all 3 are Cherry profile sets. There is no discernible difference in height or profile in actual usage and all 3 use identical Cherry profile R1-R4 layouts. GMK and Zen keycaps are both Double-shot. Domikey Vintage is triple-shot. Any difference in thickness is undiscernible to the human eye. Unfortunately I don't have a thickness meter to take accurate measurements.

All-in-one Kit contents all spread out

I really appreciated how each kit is packaged in a separate blister tray. Kits are well organized, and easy to find the specific key you need for your layout. You can save money by buying just the kits you need. 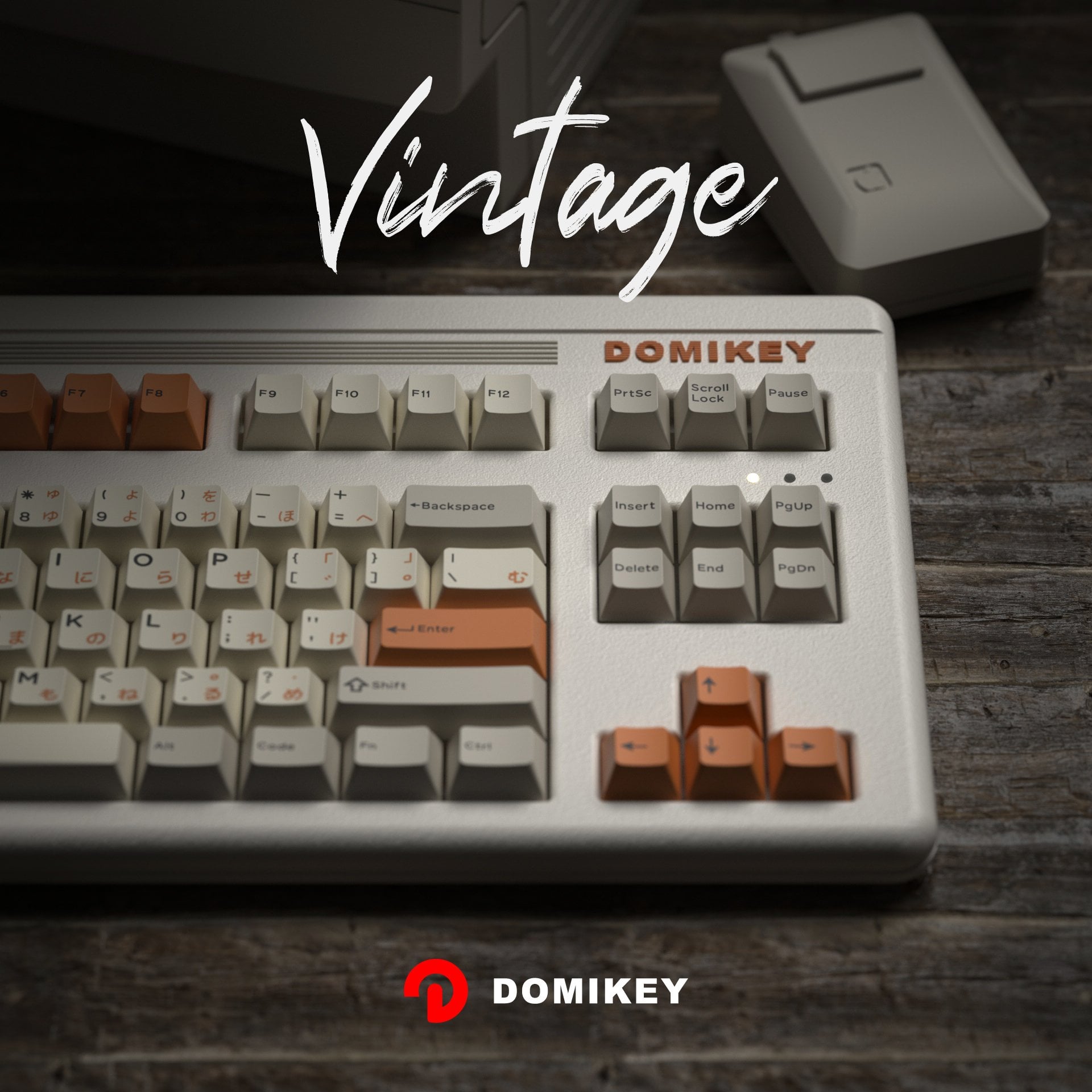 The theme for this set, as the namesake would lead one to believe, is obviously retro in nature In that regard, I have to say the designer's intentions are clear and successful. The colors chosen do indeed fit the intended theme well. The orange tone chosen for accents and hiragana legends is muted and goes well with the warm beiges and black legends of the set. Even the fonts used for both the English and Hiragana legends have a retro feel. The set would be well suited to a simple, classically designed board such as in the above product photo. The set appears a bit out of place with the modern design of my 7V, but not offensively so.

The one unique design feature of Domikey Cherry profile comes in the form of a rounded front edge on the spacebar keycaps. It makes resting your thumbs on the spacebar slightly more comfortable with no real downside from a practical standpoint. Visually, it looks a little out of place to me, but that's a minor and personal quibble.

While I realize it comes down to personal preference, I really would have liked to see options for only icons instead of text+icons on mod keys.

Seems to have a slightly deeper pitch than GMK does on my plateless 7V build. Noticeably deeper and more substantial sound than JTK.

This is where I think the Domikey set really comes away with a clear win. The value you get for having an all-in-one set for less than half the price of a similar GMK layout can't be understated. The quality is 80-90% of the way there in comparison to GMK. Overall, a very fair tradeoff if you are willing to forgive the slight inconsistencies in legends.